Africa in the Week Ending Jan. 19 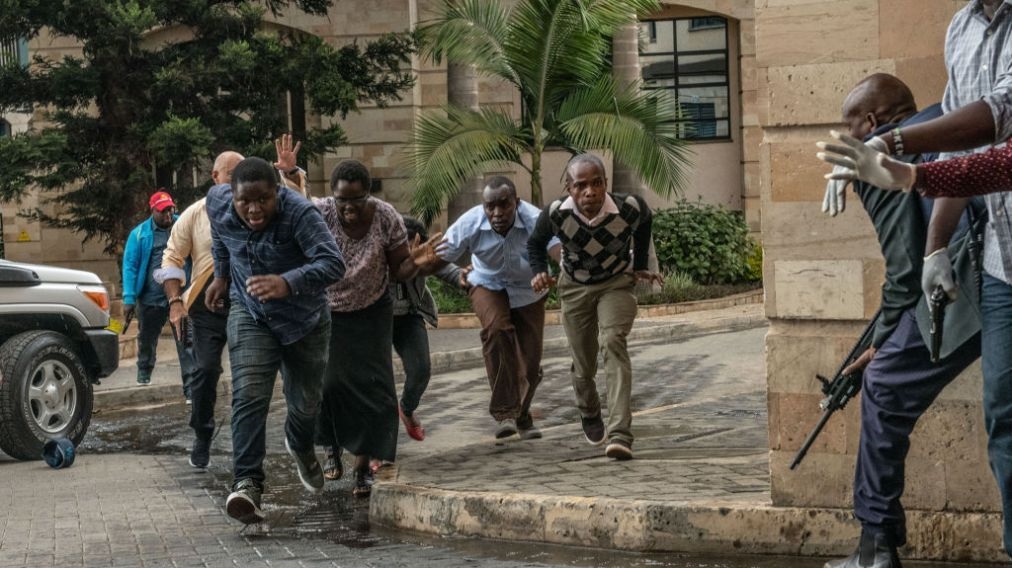 Africa in the Week Ending Jan. 19

Kenya has detained nine suspects in connection with a terror attack by the Somali-based Islamist militant group al-Shabab on a Nairobi hotel and office complex that killed 21 people, police officer said on Friday.

Police told the Reuters news agency they were pursuing a woman suspected of ferrying weapons to Nairobi from Kiunga, near the border with neighbouring Somalia, via the port city of Mombasa.

President Uhuru Kenyatta said on Wednesday that a 20-hour siege had ended with security forces killing the five militants who had stormed the hotel complex, forcing hundreds of people into terrifying escapes.

Five suspects, one of them listed as a Canadian citizen, were taken to a magistrate’s court on Friday and ordered detained for 30 days to complete investigations that were “complex and transnational”, court documents said.

The fate of the other four suspects who the police officer said were being held was not immediately clear. Police can hold suspects for 24 hours and need a court order to extend this.

Kenya, the East African hub for multinational companies and the United Nations, became a frequent target for al Shabaab after Kenya sent troops into Somalia in 2011 to try to create a buffer zone along its border.

Of the five suspects presented to court, four were men and one was a woman. Court documents said two of them were taxi drivers and one was a mobile phone financial services agent.

“I am satisfied that there is probable cause to continue with investigations against all the suspects,” Noordin Haji, the director of public prosecutions, said in a statement.

Sixteen Kenyans including a policeman, an American survivor of the Sept. 11, 2001 al Qaeda attacks on the United States, and a British development worker were among the dead in the hotel 14 Riverside Drive complex attack.

Images of the bloodied bodies of five attackers were broadcast across social media as Kenyatta announced the end of the siege, which echoed a 2013 al Shabaab assault that killed 67 people in the Westgate shopping centre in the same district.

International Criminal Court appeals judges delayed the release of ex-Ivorian leader Laurent Gbagbo on Friday, ordering that he be held for at least two more weeks after being acquitted on crimes against humanity charges.

Trial judges on Tuesday said prosecutors had failed to link Gbagbo, who has spent seven years in custody in The Hague, to election-related violence in 2010 and 2011 in which some 3,000 people were killed.

They ordered him to be set free, refusing a request by prosecutors to extend his detention while they appeal the case.

But the 3-2 decision on Friday by the five member appeals panel means Gbagbo and his co-defendant, former Youth Minister Charles Ble Goude, will continue to be held, at least until the appeals panel has reviewed the trial chamber’s decision to release them. A new court date was set for Feb. 1.

“The detention of Mr Laurent Gbagbo and Mr Charles Blé Goudé shall be maintained pending the consideration of the present appeal,” the ruling said.

Rodrigue Dadje, a lawyer for the ex-leader’s wife Simone Gbagbo, said he was not disappointed.

“I am reassured they will come out of prison stronger and cleansed by a judicial process that has been fair and transparent,” Dadje said.

Gbagbo, the first former head of state to be taken into custody by the ICC, ruled Ivory Coast from 2000-2011.

In Abidjan, Ivory Coast’s commercial capital, activist Mercelin Kouakou said: “It is with a lot of pain and sadness that I receive this news.”

“I have faith that President Laurent Gbagbo and Minister Charles Ble Goude will be back among us, and that together we will walk the path of reconciliation,” she said, speaking in front Simone Gbagbo’s residence.

Gbagbo’s acquittal was deplored by victims’ groups representing those who died in violence during the 2010 election, in which Gbagbo refused to concede defeat his rival Alassane Ouattara.

Hundreds of thousands fled the unrest that prosecutors blamed on Gbagbo and victims fear his return home could revive hostilities in Abidjan.

In their earlier ruling to free the men, the trial judges said the prosecution case was “exceptionally weak” and that it was unlikely the acquittals would be overturned.

The appeals chamber backed the prosecution arguments that Gbagbo might not return for future court hearings if he were set free. Prosecutors said that his wife, who is also the subject of an ICC arrest warrant, has been living openly in Ivory Coast.

The restrictions have resulted in a spike of interest in VPNs among Zimbabwean internet users, according to internal data from BestVPN.com. The comparison site recorded a 1,560 percent increase on Monday and Tuesday, compared to the same period the week before.

Zimbabweans have been reporting intermittent access to the internet over the last twenty-four hours and the blocking of over a dozen websites and major social media platforms, including WhatsApp and Facebook.

The Media Institute of Southern Africa (Misa) Zimbabwe has taken to Twitter to recommend VPN and Tor services to people trying to access Social Media.

It is likely this attempt to shut down online communication is in response to the violent protests that erupted across the country on Monday. The protests began after president Emmerson Mnangagwa hiked fuel prices to $3 over the weekend.

The Zimbabwean economy has been caught in a downward spiral for over a decade with high unemployment, and cash and food shortages rife across the country.

Free VPN apps could be the answer for cash-poor Zimbabweans hoping to regain their access to the internet and online communication, and crucially prevent those inside the country from being cut off from the outside world.

According to Sean McGrath, Editor at Best VPN.com, “It’s difficult to get a picture of exactly what is happening in Zimbabwe at the moment. Some are reporting that social media platforms such as WhatsApp and Facebook are inaccessible. If that’s the case, a VPN could help users circumvent restrictions.

However, local sources are now claiming that Econet and TelOne users have had their internet services completely disabled. If the Zimbabwean government is indeed pushing for a full Internet blackout, unfortunately there is very little users can do other than switch to a VPN provider not yet affected.

This trend of governments switching off the internet in times of civil unrest is concerning. Open communication and knowledge sharing are two central pillars of any strong and peaceful society, so restricting access to the web is ultimately always going to be counterproductive. We can only hope that the authorities see sense and that this escalating crisis is brought to an end as quickly and as peacefully as possible.”

Armed groups have killed more than 100 soldiers and seized a huge stock of weapons in clashes in northeast Nigeria since Dec. 26, a report by a group of aid agencies said on Friday, weeks ahead of an election in which security is a campaign issue.

An army spokesman denied the number of soldiers killed was that high.

Attacks by militants have intensified over the past few weeks and forced thousands of people to flee to safer areas in Nigeria and over the border to neighbouring Chad, the report said.

They have mostly been carried out by an Islamic State-allied faction of the Boko Haram group.

The surge has occurred in the run-up to an election on Feb. 16 in which President Muhammadu Buhari is seeking a second term, and his critics have seized upon security as an issue.

Buhari, a retired general and former military ruler, came to power in 2015 promising to defeat the Boko Haram insurgency, which aims to create an Islamic state in the northeast. Islamic State in West Africa (ISWA) split from Boko Haram in 2016 and has carried out most attacks in the last few weeks.

The report by the Global Protection Cluster in Chad, a group of aid agencies led by the United Nations High Commissioner for Refugees, said: “Raids against the Nigerian army have killed more than 100 Nigerian soldiers. According to the information available, the armed groups captured a huge stock of weapons.”

“Undoubtedly we recorded some casualties in these encounters, since we are at war and not a picnic, but certainly not the over-bloated casualty statistics being touted by UNHCR,” said Nigerian Army spokesman Onyema Nwachukwu in a text message.

The report said attacks in the Baga-Kawa area of northeast Nigeria on Dec. 26 caused more than 6,357 people to flee east into Chad and some 20,000 others to flee to safety within Nigeria.

Last month, ISWA seized the town of Baga, where a multi-national force formed by Nigeria, Chad, Cameroon and Niger to fight the militants is based. The Nigerian army later regained Baga and said it had given ISWA a “bloody nose”.

Boko Haram has killed about 30,000 people and forced about two million people to flee their homes since the insurgency began in 2009.

ISWA has been responsible for attacks on military bases of recent weeks. In contrast, Boko Haram typically carries out suicide bombings and gun raids, though it said it carried out Monday’s attack on the northeast Nigerian town of Rann.

Global Platinum Mining to 2022 report has been released providing a comprehensive coverage on global platinum industry.

It provides historical and forecast data on platinum production by country, platinum reserves, consumption to 2022.

Global platinum mine or metal content in ore production was 6.1 million oz in 2017 – up by a marginal 0.8% over 2016. Production increased slightly due to a rise in production from the world’s largest producer, South Africa.

A strong performance from Anglo’s large Mogalakwena open pit mine, where platinum output rose and from Sibanye-Stillwater’s Rustenburg platinum mines and Impala Platinum’s Rustenburg contributed to the increase in South Africa’s production.

Global platinum consumption is expected to post a moderate CAGR till 2022. Demand from China and India are the major drivers during the forecast period, with India having the fastest growth rate, during 2018-2022.

The report also includes a demand drivers section providing information on factors that are affecting the global platinum industry. It further provides mines and projects count by company by status, and by region, profiles of major platinum producers, information on the major active, planned and exploration projects by region.

Nigeria’s state oil firm said it has paid $993.7 million in arrears of capital contributions to its joint ventures with multinational oil companies by September, and still has to make up payments of $3.95 billion.

The Nigerian National Petroleum Corporation (NNPC) said it was seeking to raise about $2.3 billion in financing from third parties, such as joint venture partners, to help cover costs.

NNPC also said it was raising $3.15 billion through a firm called SEEPCO to develop 416 million barrels of reserves from the Oil Mining Licence (OML) 13 field.

NNPC has over the years piled up unpaid bills, so-called cash calls, that it was obliged to pay oil majors with which it has joint ventures for oil exploration and production.

The delay in payments has hindered oil and gas investment in the OPEC state and worsened a budget crisis as the government seeks to increase spending to boost an economy still recovering from a recession.

In November, NNPC said it would increase oil production in 2019 to 1.8 million barrels per day (bpd). At that time it was producing roughly 1.6 million bpd.