Africa in the Week Ending Jan. 5 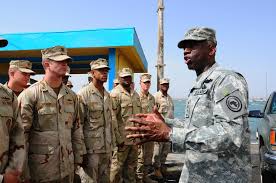 Africa in the Week Ending Jan. 5

President Donald Trump said on Friday that U.S. military personnel had deployed to Gabon in response to possible violent demonstrations in the Democratic Republic of Congo after a presidential election there.

In a letter to congressional leaders, Trump said the first of about 80 military personnel arrived in Gabon on Wednesday in case they are needed to protect U.S. citizens and diplomatic facilities in Congo’s capital Kinshasa.

He said they “will remain in the region until the security situation in the Democratic Republic of the Congo becomes such that their presence is no longer needed.”

Trump said additional forces may deploy to Gabon “if necessary.”

Congo’s electoral commission is scheduled to release provisional results of the presidential election on Sunday, but it has said there could be delays because of the slow arrival of tally sheets.

The international community has raised concerns that a disputed result could cause unrest, as was the case after the 2006 and 2011 elections.

On Thursday, the U.S. State Department called on the electoral commission to ensure votes were accurately counted and threatened to impose sanctions against those who undermined the process or threatened peace and stability in the country.

Troops and air strikes have killed more than 280 Boko Haram militants since the Niger government started an operation against the group last week, the defence ministry said.

Boko Haram has attacked Niger, Chad and Cameroon from its base in northeast Nigeria, where it has been fighting for more than nine years to carve out an Islamist caliphate.

Niger’s defence ministry said in a statement on Wednesday that the army mounted a sweep operation against the group last Friday along the southeastern Komadugu river, which separates Niger from Nigeria.

More than 200 militants were “neutralized” by air strikes and 87 were killed by Nigerien troops on the ground, it said.

In June 2016, more than 30 Nigerien soldiers were killed during a Boko Haram attack on the town of Bosso, prompting Chad to send 2,000 troops to help its West African neighbour counter the militants.

Those troops were withdrawn in October 2017, raising concern about security in the Diffa region.

Democratic Republic of Congo’s electoral commission accused the country’s Catholic Church on Friday of “preparing an insurrection” by saying it knows the winner of last Sunday’s presidential election.

The commission is scheduled to release provisional results on Sunday but has said there could be delays because of the slow arrival of tally sheets.

Donatien Nshole, the secretary-general of the Church’s bishops’ conference, known as CENCO, said on Thursday its vote tallies showed a clear victor in the Dec. 30 election, a pronouncement widely seen as a warning to authorities against rigging the vote.

“The announcement of voting trends by Priest Nshole is likely to brainwash the population while preparing an insurrection that CENCO alone will be responsible for,” commission president Corneille Nangaa wrote in a letter to CENCO president Marcel Utembi, seen by Reuters.

The Catholic Church is one of Congo’s most powerful institutions, representing about 40 percent of its 80 million people.

The ruling coalition of President Joseph Kabila, which is backing his hand-picked successor Emmanuel Ramazani Shadary, also took aim at CENCO on Thursday.

The coalition “deplores … the partisan, irresponsible and anarchic attitude of CENCO,” said Barnabe Kikaya Bin Karubi, an adviser to Kabila and spokesman for Shadary.

The U.N. Security Council was briefed behind closed doors on the latest developments on Friday at the request of France. French U.N. Ambassador Francois Delattre said the 15-member body would continue to monitor the electoral process in Congo.

“The consolidation of the results must continue with transparency,” Delattre told reporters. “We call on all actors for calm and restraint.”

Observers and the opposition say the election was marred by serious irregularities. The opposition, represented by its two main candidates Martin Fayulu and Felix Tshisekedi, and Shadary’s camp have all claimed they are on course to win, without posting specific figures.

The government says the election was fair and went smoothly.

The poll is meant to lead to Congo’s first democratic transfer of power, but the international community has raised concerns that a disputed result could cause unrest, as was the case after the 2006 and 2011 elections.

President Donald Trump said on Friday about 80 U.S. military personnel had deployed to Gabon in case they were needed to protect American citizens and diplomatic facilities in Congo.

On Thursday, the United States called on CENI to publish accurate results and threatened sanctions against anyone who sought to undermine the process.

An election dispute could further destabilise Congo’s volatile eastern provinces, where wars around the turn of the century resulted in millions of deaths, most from hunger and disease, and where dozens of militia remain active.

Meantime, Kabila’s government cut access to the internet as well as Radio France Internationale (RFI) and some local media this week, saying it wanted to prevent fake results from circulating.

“This being a very sensitive, a very tense period, we are concerned that these efforts to silence dissent could backfire considerably when the results are announced,” Ravina Shamdasani, spokeswoman for the U.N. High Commissioner for Human Rights, told reporters in Geneva.

“We are calling on all sides to refrain from the use of violence,” she said.

The European Union also called on election authorities to ensure the results reflect the will of the Congolese people.

Hundreds of people in northeast Nigeria who fled a town targeted by militants linked with Islamic State have sought refuge in capital of Borno state, Reuters witnesses said on Saturday.

An uptick in attacks by Islamists and the resulting upheaval in the region comes in the run up to an election in which President Muhammadu Buhari will seek a second term. Security has become a campaign issue following a series of attacks.

A faction of Boko Haram, Islamic State in West Africa (ISWA), which split from the insurgency in 2016 claimed responsibility for an attack on a military base in Baga, a town in eastern Borno state, which the Nigerian army said took place on Wednesday evening.

The fight to control Baga – a strategic town as it borders Nigeria, Niger, Chad and Cameroon – forced hundreds to seek safety in Maiduguri, some 200 km (124 miles) to the south.

Reuters witnesses saw hundreds of people arriving in Maiduguri and gathering at a bus terminus on the outskirts of the city.

“In Baga, we are in Boko Haram hands because yesterday they were going around with their machine and motor ,” Baga resident Abdul Kami said on Saturday, describing the attack on the town.

Residents on Friday said at least 10 people were killed in the attack on Baga.

The Boko Haram insurgency, which Buhari vowed to end when he took office in 2015, aims to create an Islamic state in northeast Nigeria. It has forced about 2.7 million people to flee their homes since 2009 and killed around 30,000.

The military and insurgents also clashed in Monguno, a town in the adjacent local government authority to Baga.

But Islamic State, in a statement issued through its news agency Amaq, said its fighters “killed and injured dozens, took four apostates as captives, burned many barracks, and seized weapons and ammunition”.

Critics of Buhari have pointed to attacks in the last few weeks to criticise the former general’s security record. In particular, they highlighted the attack on an army base in Metele, Borno state in which about 100 soldiers were killed.

Attacks by Boko Haram in the run-up to the last election in 2015 weakened then-president Goodluck Jonathan and helped Buhari to defeat him at the polls.