Africa in the Week Ending Dec. 29 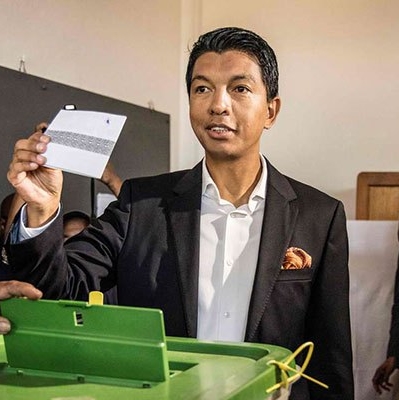 Africa in the Week Ending Dec. 29

The electoral commission chief Hery Rakotomanana said “efforts were made to respond” to concerns raised by both candidates which included a review of the counting software.
The two-round election was plagued by mutual accusations of vote-rigging in a country with a long history of instability.

Mr Rajoelina and Mr Ravalomanana are former presidents and long-time rivals.
They each spent lavishly on campaigning, with promises and handouts distributed liberally to voters, who are among the poorest in Africa.
Boeing, Nigeria’s Green Africa Airways Announce Largest Aircraft Deal in Africa

Boeing and Lagos-based Green Africa Airways have announced a commitment for up to 100 737 MAX 8 aircraft, evenly split into 50 firm aircraft and 50 options, as the airline gears up to begin commercial operations.

The total deal carries a list-price of $11.7 billion, the largest aircraft agreement from Africa, and will be reflected on Boeing’s Orders and Deliveries website once finalized.

“Today is a historic day for the Nigerian and African aviation industry,” said Babawande Afolabi, Founder & CEO, Green Africa Airways. “This landmark deal takes us much closer to our long-held dream of building a world-class airline that will unlock a new realm of positive possibilities for millions of customers. Broadly speaking, this deal is a bold symbol of the dynamism, resilience and soaring entrepreneurial drive of the next generation of Nigerians and Africans.”

Green Africa Airways, a value airline based in Lagos, Nigeria aims to offer safe, quality and affordable air travel and be a significant contributor to the economic development of Nigeria and the African continent.

The new airline has received its Air Transport License from the Nigerian government and is anchored by a group of senior industry leaders led by Tom Horton, former Chairman and CEO of American Airlines, William Shaw, Founder and former CEO of VivaColombia and Virasb Vahidi, former CCO of American Airlines.

“Nigeria is uniquely positioned to be the home of the next major value airline. The strategic partnership with Boeing positions Green Africa Airways to expand and improve air travel for customers in Nigeria, and further strengthens the relationship between the United States, Nigeria and Africa,” Vahidi said.

The airline initially plans to develop the Nigerian market and then build a strong Pan African network. According to Boeing’s 20-year Commercial Market Outlook, airlines in Africa will require 1,190 new airplanes as the continent boosts both intra-continental and intercontinental connectivity over the next couple of decades.

“The growth potential for air travel across Nigeria and Africa is extraordinary with the airplane fleet expected to more than double over the next 20 years. We are delighted that Green Africa Airways has selected the 737 MAX to serve this expanding market,” said

Ihssane Mounir, Senior Vice President of Commercial Sales & Marketing, The Boeing Company. “We look forward to Green Africa Airways building their fleet with the MAX and taking advantage of the jet’s efficiency and dependability to open new options across Nigeria and the African continent. Boeing will be a trusted partner to Green Africa Airways as the MAX is introduced into their operations and through their long-term success.”

The 737 MAX is the fastest-selling airplane in Boeing history, accumulating more than 4,800 orders from over 100 customers worldwide. The airplane’s superior performance is enabled by the latest technology in the single-aisle market, including advanced CFM International LEAP-1B engines, Advanced Technology winglets, and other airframe enhancements.
South Africa’s MTN Pays $53 Million to Settle $8.1 Billion Nigeria Dispute

South African telecoms operator MTN Group has agreed to make a $53 million payment to resolve a dispute in Nigeria, it said on Monday, ending a four-month multi-billion dollar dividend repatriation row that has hammered its share price.

Nigeria is MTN’s biggest market, accounting for a third of the African telecoms heavyweight’s annual core profit, but it has proven problematic for the company in recent years.

The Central Bank of Nigeria (CBN) had ordered MTN and its lenders to bring back a total of $8.1 billion it alleged the company had illegally repatriated using improperly issued paperwork between 2007 and 2008.

“The CBN upon review of the additional documentation concluded that MTN Nigeria is no longer required to reverse the historical dividend payments made to MTN Nigeria shareholders,” MTN said in a statement.

However, the central bank has found that a 2008 private placement remittance worth around $1 billion was based on certificates that did not have final approval.
As such, MTN said it had been instructed by CBN to implement “a notional” reversal of that transaction by making a $52.6 million payment.

“MTN Nigeria and the CBN have agreed that they will resolve the matter on the basis that MTN Nigeria will pay the notional reversal amount without admission of liability,” MTN said in a statement.

The CBN confirmed the outline of the agreement with MTN, without mentioning the $53 million payment. The agreement would lead to an “amicable disposal of the pending legal suit between the parties and final resolution of the matter,” it said in a statement.

MTN and the CBN had filed a claim and counter-claim in a Nigerian court over the dispute. The legal case has been adjourned several times as lawyers said talks were under way on a settlement.

The settlement comes around two years after MTN agreed to pay a more than $1 billion fine for missing the deadline to cut off unregistered SIM cards.

Shares in MTN have fallen by around 20 percent since the end of August when the CBN asked the company to return the money.

The stock, which closed 2 percent higher on Monday, is also under pressure from a separate dispute with the attorney general of Nigeria (AGF), who has slapped the company with a $2 billion tax bill.

MTN has gone to court seeking to block the attorney general from taking further action regarding the order for back taxes. The matter was adjourned last month until next February.

“MTN Nigeria continues to maintain that its tax matters are up to date and no additional payment, as claimed by the AGF, is due, and consequently no provisions or contingent liabilities are being raised in the accounts of MTN Nigeria for the AGF back taxes claim,” the company said.

Meantime, Nigeria’s central bank said on Monday that an agreement reached with MTN over allegations that the South African company illegally repatriated $8.1 billion would end legal proceedings and meant the matter had been resolved, it said in a statement.

Earlier, MTN said the matter was resolved and it agreed to make a $53 million payment. Nigeria’s central bank did not refer to a figure but said the sides decided the agreement would “lead to amicable disposal of the pending legal suit between the parties and final resolution of the matter”.
Three DRC Opposition Cities Excluded From Presidential Election

Electoral commission CENI said an Ebola outbreak was behind the cancellation of the ballot in the eastern Democratic Republic of Congo cities of Beni and Butembo. It cited ethnic violence for the same action in the western city of Yumbi.

The election is meant to lead to the first democratic transfer of power in Africa’s leading copper producer, where conflicts have in the past destabilised the entire central part of the continent.

Lawmaker Muhindo Nzangi Butondo, a coordinator for opposition presidential candidate Martin Fayulu, called for street protests in Beni, Butembo and nearby Goma on Thursday, describing the CENI’s actions as an attack on the Nande ethnic group.
“(President Joseph) Kabila is taking revenge against the Nandes,” Nzangi said in a statement.

The cities are in a part of the country where conflicts over the past two decades fought at least in part on ethnic grounds have killed and displaced millions.

Government spokesman Lambert Mende declined to respond directly to Nzangi’s comments. He said he understood the anger of those affected but justified the CENI’s decision for security reasons.

Moise Katumbi, a prominent opposition leader who was barred from standing in the election, tweeted that the Congolese “must take matters into their own hands and chase away this regime”

He and Nzangi accused the CENI of trying to tip the election in favour of Kabila’s preferred candidate, Emmanuel Ramazani Shadary.
Opinion polls are rare in DRC, but a survey from a New York-based research group in October showed another leading opposition candidate, Felix Tshisekedi, on 36 percent, followed by Shadary on 16 percent and Fayulu on 8 percent.

Tshisekedi will participate in Sunday’s vote despite the CENI’s announcement, a spokesman for his UDPS party, Paul Tshilumbu, told Reuters.

The elections – also incorporating legislative and provincial polls – were originally meant to take place in 2016. They have been repeatedly postponed since, sparking violence in which security forces have killed dozens of people.
The CENI pushed the election date back by seven more days last week due to delays in deploying voting materials.

Explaining the three exclusions, it said on Wednesday: “Elections lead to important movements of voters toward polling places, thus … raising the risk of propagation of this disease (Ebola) and providing the conditions for terrorist attacks.”

On Dec 5, Health Minister Oly Ilunga said the Ebola outbreak – declared in August and the second-worst in history – would not interfere with elections, noting that voter registration elsewhere in Congo last year had not been interrupted by a separate outbreak.

A health ministry spokeswoman was not immediately available for comment on Wednesday.

Legislative and provincial elections will take place in Beni, Butembo and Yumbi in March, the CENI said. “We know it’s tough but that’s the situation we are facing,” CENI spokesman Jean-Pierre Kalamba told reporters.

The three cities, home to more than 1.2 million of Congo’s roughly 40 million registered voters, are known as bastions of opposition to Kabila.

Voting elsewhere in the vast central African nation will go ahead on Sunday as planned, the CENI said. Final presidential results would be announced on Jan. 15 and the new president sworn in on Jan. 18.

Kabila, 47, has governed since his father’s assassination in 2001. He won elections in 2006 and 2011, although the latter was marred by widespread accusations of fraud.

Soldiers in DRC Fire in the  Air to Disperse Election Protesters
Security forces in eastern Democratic Republic of Congo fired live rounds and tear gas on Thursday to scatter demonstrators who burned tyres and ransacked an Ebola centre in protest at their exclusion from the presidential election.

The electoral commission (CENI) announced on Wednesday that it was cancelling voting in Sunday’s election in the opposition strongholds of Beni, Butembo and their surrounding areas due to an ongoing Ebola outbreak and militia violence.

In another sign of the government’s hardening stance in the run-up to the vote, the foreign ministry announced the expulsion of EU ambassador Bart Ouvry after the European Union renewed sanctions against officials including the ruling coalition’s presidential candidate, Emmanuel Ramazani Shadary.

The EU Commission was not immediately available on Thursday evening to comment on the expulsion.

Sunday’s vote is meant to pick a successor to President Joseph Kabila, who has ruled since 2001. If successful, it would mark Congo’s first democratic transition after decades marked by authoritarian rule, coups and civil war.
Politicians in Beni denounced the CENI’s decision as an attempt to boost Shadary and they called for protests.

“There was a group of demonstrators who wanted to enter the CENI office … to demand the cancellation of the decision,” said Giscard Yere, a Beni resident. “But the police officers and soldiers who were there fired to disperse the demonstrators.”
Protesters ransacked an Ebola isolation centre in Beni, causing 24 patients to flee, health ministry spokeswoman Jessica Ilunga said.

Demonstrators also attacked the office of the government agency coordinating the response to the Ebola virus in Beni, said Aruna Abedi, the deputy director of the Ebola response.

“Protesters tried to force the door of the centre,” Abedi told Reuters. “They were chanting songs hostile to the government and demanding elections. They threw projectiles.”
Colonel Safari Kazingufu, the police commander in Beni, said three policemen were wounded while trying to restore order, including around the Ebola centres. Seventeen protesters were detained in connection with the attack on the centre, he said.