Africa in the Week Ending Nov. 3 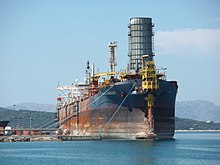 Africa in the Week Ending Nov. 3

Ghana Starts Construction of Floating LNG Plant
Ghana’s liquefied natural gas (LNG) import project is finally under construction, years after its original inception, with two vessels contracted to store and regasify the fuel by the second quarter of 2020, a project partner said on Wednesday.

China Harbour Engineering Company has already begun construction work on a marina with a Floating Regasification unit (FRU) to be provided by the CSSC Jiangnan shipyard and a Floating Storage Unit by Gasfin, Gasfin’s chief executive Roland Fisher said.
Ghana has been trying to get an LNG import project off the ground for years, with two leading LNG vessel operators, Golar and Hoegh, earmarking their ships for the Tema port only to withdraw due to delays over contracts.

However, this time round, contracts have been finalised, Fisher told delegates at an LNG conference. “The project is under construction. It’s not subject to finance. It’s not subject to any other permitting,” he said
Nigeria State Oil Company Subsidiary, NIDAS, Returns to Shipping
The Nigerian National Petroleum Corporation (NNPC) has announced the re-entry of its subsidiary, NIDAS Shipping Services, into the international shipment of crude oil and petroleum products, seven years after falling out of reckoning in the global oil freighting trade.

NIDAS’s re-entry is in tandem with the ongoing strategic re-engineering of some NNPC subsidiaries to ensure multiple income streams and value addition to the corporation in line with the aspiration of the corporation’s Group Managing Director, Dr. Maikanti Baru, a release by NNPC Group General Manager, Group Public Affairs Division, Mr. Ndu Ughamadu, has stated.

The corporation explained that as a first step to regain its market position, NIDAS has established a robust chartering and operation desk in its UK office to help the company secure sea-going vessels from spot market to herald its market re-entry and foster strong competitive edge.

NNPC said that as part of strategy to ensure effective participation in the entire supply value chain, NIDAS would optimize right of first refusal offer in the NNPC annual crude oil term and Direct-Sale-Direct Purchase (DSDP) agreements with off-takers.

Under the terms of the deal, the off-takers are obligated to offer the NNPC shipping subsidiary the right of first refusal in freighting of cargoes.

The long-term aspiration of the company is to own and operate fleet to secure a significant market share in the global shipping market.

Ughamadu said the development was part of the GMD’s 12 Business Focus Areas (12BUFA) which he unfolded when he took over the leadership of the corporation in 2016.

Incorporated in 2007 as a Joint Venture between NNPC, Daewoo Shipbuilding and Marine Engineering Company Limited (DSME), NIDAS is presently a wholly owned subsidiary of the corporation.

Judge Robert Nugent, who is heading an inquiry into Moyane, had recommended the suspended tax chief should be removed from office for the mismanagement of SARS under his tenure and to forestall any further deterioration of the tax service.

In a letter to Moyane, Ramaphosa said the interim report of the Nugent Commission “paints a deeply concerning picture of the current state of SARS and the reckless mismanagement which characterised your tenure as Commissioner of SARS.”
Ramaphosa, who had given Moyane time to respond to the recommendations by Nugent, said the former tax head failed to deal with the issues raised in the judge’s report.
Moyane was not available for comment on Thursday. He has repeatedly defended his record and denied any wrongdoing.

Ramaphosa suspended Moyane in March after saying he had lost confidence in the ability of Moyane, appointed by scandal-tainted former president Jacob Zuma, to lead the agency. Ramaphosa took that step after Moyane refused to step down.
The agency has been plagued by infighting over the last the three years, has missed revenue targets, and is subject to ongoing government investigations.

Cashews are the most valuable of the East African nation’s export crops, but falling prices have prompted Tanzanian farmers to halt sales, saying operational costs were higher than what was offered for the produce.

Magufuli said late on Sunday that the minimum price will be set at 3,000 shillings ($1.31) per kilogram, up from the Cashewnut Board of Tanzania’s previous minimum price of 1,550 shillings per kg.

“There will be no cashewnuts bought below 3,000 shillings. I just want the price to go up,” President Magufuli said in a televised meeting with buyers. “
“If you don’t want to buy at 3,000 shillings, let me know today so that we can even use our army from tomorrow to buy it.”

Magufuli also said that the industry board’s acting director-general, Wakuru Magigi, has been removed from his post over the price levels set by the board.

In recent board auctions, buyers offered between 1,900 shillings and 2,717 shillings per kg, down from an average of 3,600 shillings last season, which ran between October and September.

Magufuli said the government was ready to buy farmers’ cashewnuts if there are no private buyers at the new prices but also told buyers that it is up to them “to buy cashew nuts at prices that you know are reasonable”.

The president said this year’s crop is forecast to reach 220,000 tonnes.
A statement from presidential spokesman Gerson Msigwa on Sunday said that buyers at the meeting accepted the price set by Magufuli but had asked the government to remove some charges levied on cashewnut production.

Mohammed Nassoro, manager of the Tandahimba and Newala Cooperatives Union, one of the largest farmers’ groups in southern Tanzania, said farmers welcomed the new price.

“Now they do not have any problem and they are waiting for the upcoming auctions to see if buyers will respond positively,” Nassoro said.